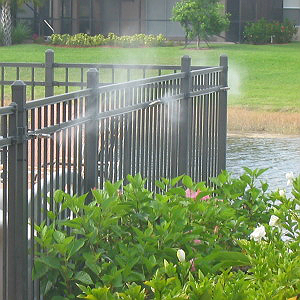 Buzz Kill Pest Control is a leader in providing, installing and servicing mosquito misting systems in the Dallas Fort Worth metroplex. We understand how disappointing it can be to not be able to go out and enjoy your outdoor space. We have experienced this too in the past. This is why we chose to become one of the premier pest control companies in the Dallas Fort Worth area to offer commercial and residential mosquito misting systems, to get you back to enjoying the outdoors before the mosquitoes took over.

Buzz Kill Pest Control does all the work so you don’t have to. Simply choose and sign up for one of our pest control service plans. There has never been a more effective and convenient method for preventing mosquito bites in your yard. You will never again have to spray your kids, your guests or yourself with messy sprays, repellents or remember to fog your yard before a cookout or outdoor party.

Buzz Kill Pest Control specializes in the installation, ongoing service and refills of automated mosquito control mister systems, and we know every install is different based upon your property layout and families needs. This is why we will send one of our licensed exterminators  to your home or business for a free consultation for an automated mosquito misting system. The installation of the mosquito mister will consist of a variety of nozzles, tubing and a controller installed on the property. These components and controller will be installed in  inconspicuous areas throughout your lawn to eliminate mosquitoes, flies, gnats and other insects while fitting right in with your family and lifestyle needs.

The automated mosquito control mist system sprays a very fine mist of pyrethrin through nozzles installed around the perimeter of your yard. The mist settles on the grass and landscaping, killing any mosquito that comes in contact with it. The system is timed to mist 2 to 3 times a day, early in the morning and early in the evening when mosquitoes are most active and while beneficial insects, like bees and butterflies are not. It also kills or repels other unwanted pest like flies and gnats. We offer both tanked and tank-less systems which gives us and our customer’s better flexibility for any mosquito infestation or property layout.

Do you already have a mosquito misting system but need service, support or a chemical drum or tank refill? Please contact us so we can provide you and your system with the same topnotch service and support as we do our own systems and customers.

Adult mosquitoes are about 1/4-inch long, with long legs, a pair of clear wings and a slender body. The body and wing veins are covered with scales. The Asian tiger mosquito, Aedes albopictus (Skuse), was first detected in Texas in 1985 and is now a wide-spread and common species. It is distinctly black with white markings on the body and legs. The thorax is marked with a single white stripe down the middle.

Females of “standing water” mosquito species (Anopheles, Coquilettidia, Culiseta, Culex species) deposit masses of eggs in “rafts” on the water surface, while “floodwater” species (Aedes, Psorophora species) lay eggs either on plants on or below a still water surface or in moist soil depressions that will be subject to later flooding. Time for eggs to hatch varies with species from 16 to 24 hours to more than two years for floodwater mosquitoes.

Blood-feeding females have piercing-sucking mouth-parts and usually must ingest a blood meal in order to develop eggs. Males, as well as females, sip nectar, honeydew and fruit juices.
Mosquito species vary in aquatic larval habitats, ranging from ponds, puddles, containers and tree holes to other sources of standing, slow moving, fresh or salty water. Large numbers of mosquitoes can develop in swamps, tidal marshes, flood water and rice fields. Male mosquitoes swarm in “clouds” to attract females. Mosquitoes can fly and disperse with the wind.

Adult females bite and may transmit diseases such as malaria, filariasis, West Nile, arthropod-borne viruses such as yellow fever, denge and encephalitis. Saliva, injected by females while engorging on blood causes itching. There are about 55 species of mosquitoes in Texas (170 species nationally).