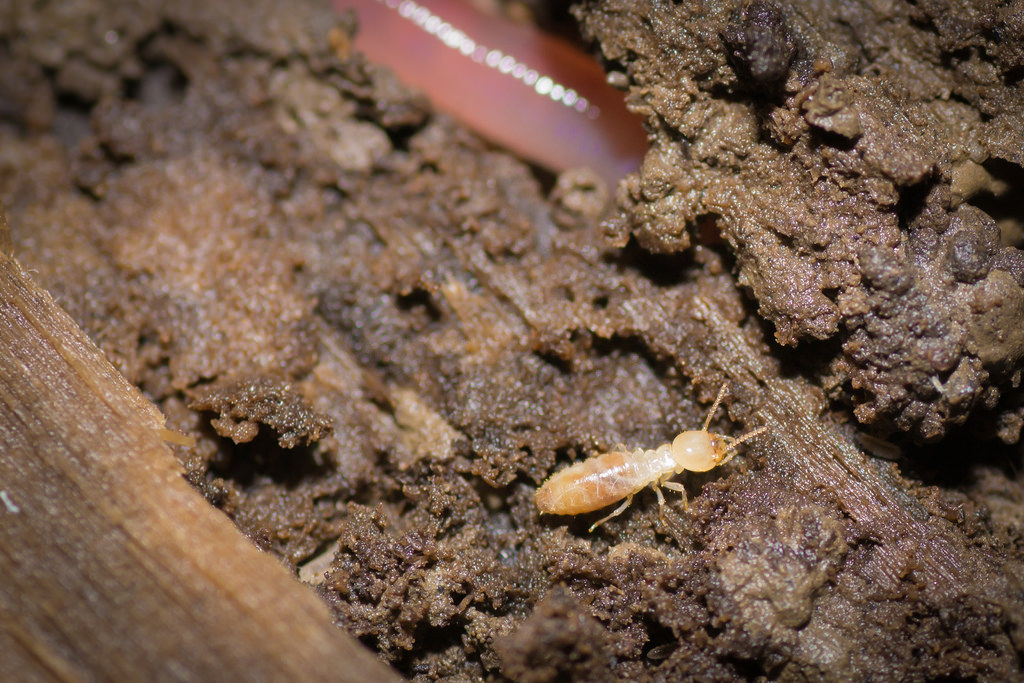 Buzz Kill Pest Control has over 20 years of termite control experience in the Dallas Fort Worth area. We provide termite extermination services for commercial, residential and industrial structures in both pre-construction and post construction phases of building. Our pest control service plans can include liquid or conventional termite control along with baiting systems that include products like Termidor, Talstar, Advance Termite Bait System and Firstline Termite Defense System.

Buzz Kill Pest Control knows every infestation is unique and requires us to perform an inspection prior to making any recommendation of termite control or giving an estimate. Visit our Pest Control Specials page for a money saving offer that could be applied to your termite treatment. If you are in the pre-construction phase of building and looking to prevent termites or you are concerned that you might have an active infestation, contact Buzz Kill Pest Control for a free termite estimate or consultation.

Subterranean Termites are the most destructive insect pests of wood in the United States. They cause billions of dollars in damage each year and have a negative impact on a family’s most valuable possession – the home.

Problems occur when termites attack the wooden elements of homes, businesses and warehouses built by humans. The presence of termites is often not readily noticed because their activity is hidden behind wall-boards, siding or wood trim. Homeowners in all areas of Texas should watch for Subterranean Termites and take precautions against infestations. To minimize damage from termites, it is helpful to know the description, life cycle and signs of infestation of termites as well as preventive and control measures of termites.

Subterranean Termites are social insects that live in nests or colonies in the soil. They contain three forms or castes: reproductives, workers (pseudergates) and soldiers. Individuals of each caste have several stages: the egg; the larva that develops into a pseudergate and eventually into a brachypterous nymph or soldier; and the adult. There are three forms of adult reproductive termites including primary, secondary and tertiary.

Reproductive males and females can be winged (primary) or wingless (secondary or tertiary). Females of each can lay eggs and produce offspring. The bodies of winged primary reproductives, also called swarmers or alates, vary by species from coal black to pale yellow-brown. Wings may be pale or smoky gray to brown and have distinct vein patterns used in identification. Reticulitermes swarmer termites are about 1/4 to 3/8 inch long.

Termite workers (psuedergates) make up the largest number of individuals within a colony and do all the work. They are wingless, white to creamy white and 1/4 to 3/8 inch long. They forage for food, feed the other castes, groom the queen and maintain and build tunnels and shelter tubes. Their mouthparts are very hard and adapted for chewing through wood or other cellulose materials. The worker caste is responsible for the damage that makes termites an economically important problem.

Soldiers resemble workers in color and general appearance, except they have well-developed brownish heads with strong mandibles or jaws. Soldiers defend the colony against invaders, primarily ants and other termites. They cannot forage for food or feed themselves, and they depend on the workers to care for them.

Ants and termites often swarm at about the same time of year but control measures for each differ greatly. It is therefore, important to be able to distinguish between swarming termites and ants.

After 2 to 4 years, a Subterranean termite colony is mature and produces “swarmers” (winged primary reproductives). Termite swarmers leave the colony in large numbers during the spring and early summer. Swarming begins in South Texas in January and February; in the Panhandle region of Texas, swarms do not occur until April and May. Environmental factors such as heat, light, and moisture trigger the emergence of swarmers, with each species having its own set of requirements. The number of swarmers produced is proportional to the age and size of the colony.

During the swarming process, males (kings) and females (queens) pair off using pheromones. Successful reproductive pairs land, lose their wings and seek cover under rocks or other moist materials. A pair will make a very small nest before mating. Initially, the new queen termites lays only a few eggs. The male remains with the female and helps care for developing eggs and the larva that hatch.

The maximum size of a termite colony depends on location, food availability and environmental conditions, especially temperature and moisture. Some colonies remain small; others contain up to several thousand individuals. New colonies form when groups of termites become isolated from the main colony and establish sub-colonies. This is called “colony splitting” or “budding.” These sub-colonies may exist independently or reunite with the main colony.

Subterranean Termites get their nutrition from wood and other material containing cellulose. Paper, cotton, burlap or other plant products often are actively consumed by termites. Sometimes termites will even tunnel into the dead heartwood or pith of living plants. Most species of Subterranean Termites cannot digest cellulose directly and depend on single celled protozoans and bacteria living in their hindguts to help digest the cellulose. Digested cellulose is then shared with the developing larvae, other workers, soldiers and reproductives.

Termites are attracted to certain odors of wood-decaying fungi that make the wood more palatable and easier to penetrate. In some instances, the fungi provide a source of nitrogen in the termite diet.

Moisture is important to Subterranean Termites as they have very little resistance to dehydration. To survive, termites must maintain contact with the soil (their primary source of moisture) or other above-ground moisture sources, such as defective plumbing, leaky roofs, leaks from air conditioning condensers or poorly maintained gutters.

Dead trees and brush provide a natural food source for foraging Subterranean Termites. When natural vegetation is cleared and houses are built, termites often switch to feeding on wooden structures. Termites enter buildings through wood that is in direct contact with the soil and by building shelter tubes over or through cracks in foundations. Any cellulose material in direct contact with the soil, such as trees, vines or plumbing fixtures, can serve as an avenue of infestation.

Active termite infestations can be difficult to detect. To find out if a home is infested, the structure should be checked for evidence of swarmers (including wings or dead termites in windows), mud tubes or damaged wood inside or around a structure.

Swarmers: Generally, the first sign of infestation homeowners notice is swarming reproductives on windowsills or near indoor lights. Swarming termites inside the house usually indicate an active infestation in the structure. Termite wings may be found on windowsills or stuck to cobwebs indoors. Though swarmers outdoors are a natural phenomenon, they indicate that termites are present and may be attacking nearby structures.

Mud Tubes: Mud shelter tubes on crawl space piers, utility penetrations or on foundation walls and slabs are a sign of termite infestation. Termite shelter tubes can blend in well with the soil or concrete, making them difficult to see. To make inspecting the home for termites easier, prune vegetation away from the house walls. The soil line should be several inches below the top of slabs or foundation walls. An inspector should look for mud tubes carefully along cracks, in corners or where the top of the foundation is close to the ground. A screwdriver is useful to break open suspected termite tubes and detect live termites.

Wood damage often is not found initially, but is positive indication of a current or past termite infestation. Wherever wood comes in contact with the soil there is a high risk for termite entry. Carefully examine any wood that thuds or sounds dull when struck by a screwdriver or hammer. Probing suspected areas with sharp instrument such as a screwdriver or an ice pick will often disclose termite galleries or damage.

Subterranean Termite damage is usually confined to the soft, spring-growth of wood. Termite tunnels and galleries tend to follow the wood grain and are lined with mud or may have a pale, spotted appearance resulting from soft fecal material plastered on tunnel surfaces. Moisture sources may cause wood decay and can encourage an infestation. Deterioration caused by wood-destroying fungi can be confused with termite damage.

Native Subterranean Termite species in the Genus Reticulitermes are found throughout the United States. Because they are so broadly distributed they are considered the most economically important.