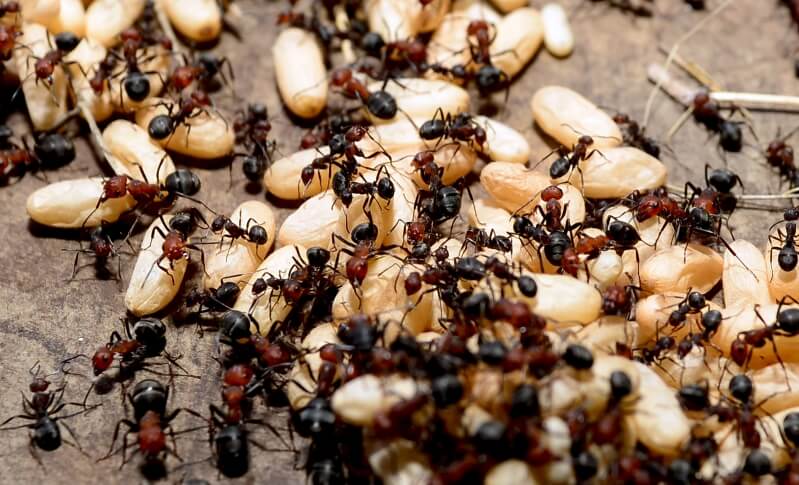 Buzz Kill Pest Control knows that ants can be a nuisance to your home, yard or business year round. There are many kinds of ants that can invade your residence or business. Identifying the type of ant is very important in the ant control treatment that is provided for you.

Some people may have an allergic reaction to fire ant bites that may lead to severe health problems. According to the American College of Allergy, Asthma & Immunology, life-threatening allergic reactions to insect venom occur in 0.4 percent to 0.8 percent of children and 3 percent of adults.
Before recommending an ant control extermination plan, Buzz Kill Pest Control performs a thorough inspection of your home or business to identify what kind of ant is causing your problem.

Often a common sight around Texas homes throughout the year. There are 25 species of Camponotus in the United States and most are native species. Although their natural nesting sites are in trees, Carpenter Ants can also invade and live indoors.

Carpenter Ants are highly adaptable and capable of establishing nests in diverse environments. They most commonly occur in wooded areas preferring to nest in a moist, humid environment. They nest in live or dead trees and stumps, dead tree limbs, buried wood, in firewood, fence posts, landscape timbers, tree holes, hollow wooden doors, ceiling beams, under roofing boards and attic insulation, voids above windows and porches, under rocks, logs and other objects on the ground.
In structures, timbers damaged by water leaks attract these ants, and they select damp, soft, decaying areas for nesting sites. These ants prefer to nest in wood, but are capable of nesting in preformed cavities, or natural cavities, termite galleries, or even in exposed sites in boxes, cabinets or attics. Carpenter Ants do not eat wood, but remove quantities of it to enlarge the nest for a growing colony. This activity may cause structural damage. When searching for food, Carpenter Ants feed mainly on honeydew produced by homopterous insects (aphids, mealy bugs, and scales) that feed on sap from plant tissues.

Little is known of the life history of this ant.

Little Black Ant colonies are moderately sized to large, containing up to 2,000 workers and many queens. Colonies consist almost exclusively of workers and brood (eggs, larvae, and pupae) during most of the year, but winged males and females are produced during the summer. Nuptial flights have not been observed but probably occur. It is presumed that most nests are established by one or two queens. In the laboratory, queens may live approximately one year; workers may live about four months.

Fire Ants build mounds of soft soil. When disturbed, they emerge aggressively and sting. The sting usually leaves a white pustule on the skin.

Solenopsis geminata is the most common native Fire Ant species encountered. To the unaided eye, they are almost identical to Red Imported Fire ants. However, S. geminata will have a few larger workers with large, square-shaped heads. These ants specialize in collecting and milling seeds.

Pharaoh Ants have a stinger, but it is not always visible. They do not sting humans.

Pharaoh ants form large colonies consisting of many nests, which colony members move freely between, without any antagonism. Colonies vary greatly in size. Some colonies may have only a single queen with a few hundred workers, whereas other colonies may have hundreds of queens with several thousand workers. Queens may live for a year and lay up to 35 eggs per day. Workers develop from egg to adult in 36 days. Winged males and females require about 44 days to develop. The life span of workers is about 70 days.