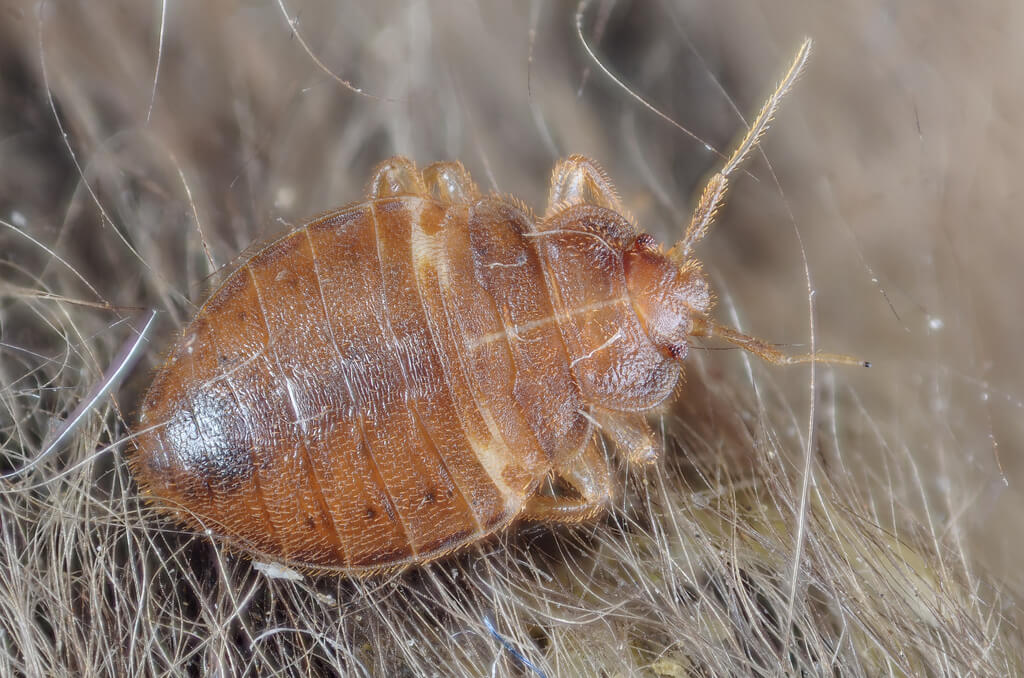 Buzz Kill Pest Control takes great measures to eradicate an infestation of bed bugs from your living environment. Our customers can rest assured that their bed bug control  treatment will be thorough and cost effective. Bed bugs are on the rise in multi-family dwellings such as apartment complexes. Hotels, motels and even airplanes are seeing problems with bed bug control. Bed bug infestations are also occurring in homes with one family, so the need for control of these once eradicated pests has become increasingly important over the last several years.

Buzz Kill Pest Control uses the latest in technologies as well as bed bug control treatment programs to fight these pesky blood sucking creatures. Below is some additional information that may help educate you on these increasingly common pests.

Bed bugs are small, brownish, flattened insects that feed solely on the blood of animals. The common bed bug, Cimex lectularius, is the species most adapted to living with humans.

Adult bed bugs are about 1/4 inch long and reddish brown, with oval, flattened bodies. They are sometimes mistaken for ticks or cockroaches. The babies resemble the adults, but are smaller and somewhat lighter in color. Bed bugs do not fly, but can move quickly over floors, walls, ceilings and other surfaces.

Under favorable conditions of temperatures above 70 degrees F and regular feeding, female bed bugs will lay about 200 eggs during her lifetime at the rate of 3 or 4 per day. Eggs are coated with a sticky substance, causing them to adhere to objects on which they are deposited. The eggs hatch in 6 to 17 days and the babies begin to feed on blood immediately. It takes approximately five months for them to reach maturity.Environmental factors and the availability of food will cause considerable variation in the developmental rate of all stages of growth. Young and old bed bugs may live for several weeks to several months without feeding, depending upon the temperature.Common hiding places are evident by black or brown spots of dried excrement on surfaces on which the bugs rest. Eggs, egg shells and cast skins also may be seen near these places. There usually is a distinctive odor in rooms where bed bugs are numerous.

At the beginning of an infestation in a room, bed bugs are likely to be found about the turfs, seams and folds of mattresses and covers; later they spread to crevices in the bedsteads.

If allowed to multiply, they establish themselves behind baseboards, window and door casings, pictures and picture moldings, in furniture, loosened wallpaper, cracks in plaster and partitions.

Bed bugs prefer to hide close to where they feed. However if necessary, they will crawl several feet to obtain a blood meal. Initial infestations tend to be around beds, but the bugs eventually may become scattered throughout a room, occupying any crevice or protected location. They also can spread to adjacent rooms or apartments.

Bed bugs feed mostly at night, by piercing the skin of people or animals as they sleep. However, if they are very hungry and if the light is dim, they will feed during the day.

When bed bugs bite, they inject a fluid into the skin that assists them in obtaining blood. Often the fluid causes the skin to become irritated, inflamed and to itch. Elongated, spindle shaped welts develop as a result of the bite. People seldom know that are being bitten.

Unlike flea bites, which occur mainly around the ankles, bed bugs feed on any bare skin exposed while sleeping (face, neck, shoulders, arms, hands, etc.). The welts and itching are often attributed to other causes such as mosquitoes. For these reasons, infestations may go unnoticed for a long time and can become quite large before being detected.