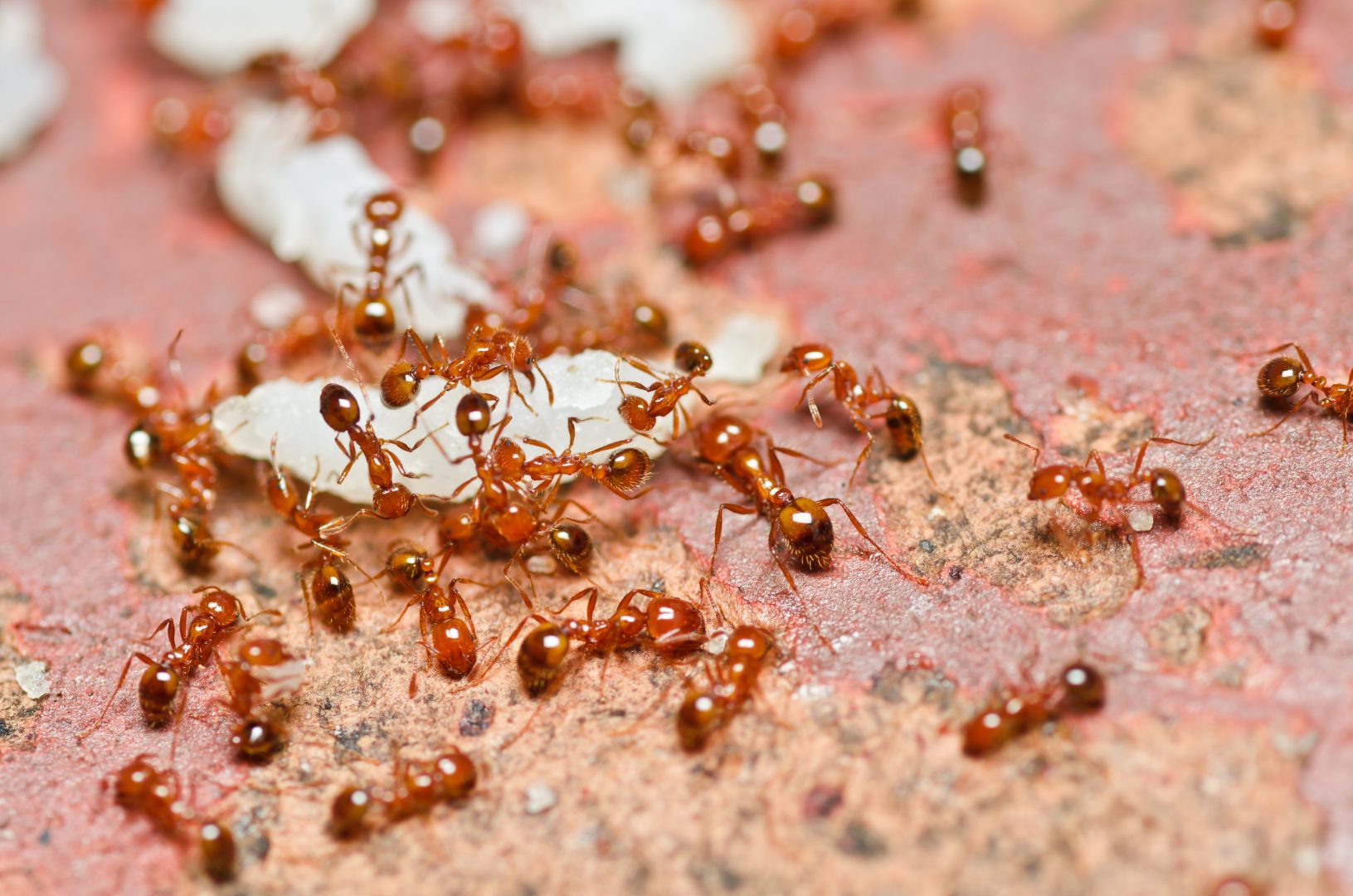 Pest of the Month: May – Fire Ant

Included in the genus Solenopsis, the fire ant gets its name for more reasons than just its fire red color. Fire ants, like most ants and insects, have a body that is divided into three sections: the head, thorax, and abdomen, they also have a pair of antennae and three pairs of legs. A fire ant can be distinguished from a typical ant by their reddish brown/reddish black head and body with a darker abdomen. They range from 1.6 mm to 5 mm in length, and at the end of the body they have a stinger, which contributes to their name as well.

The red imported fire ant is not a native species in North America, but has become quite a nuisance throughout most of the southern parts of the United States. They are common across the majority of the south, spreading from California to Florida and as far north as Virginia and Oklahoma. Since the 1930’s, when the red imported fire ant was accidentally brought to our country through a cargo shipment in Alabama, they have spread and swarmed throughout the southern half of the country. They have stayed in the southern states because, like most fire ants, they prefer warm and sunny weather conditions. They do not like shaded areas, which is why you will typically find them in dry areas such as fields and sand. Within these sunny areas, they build mounds which are typically 18 cm tall and 61 cm wide. Within their colonies, there can be up to 250,000 worker ants and typically at least one queen ant.

While most think the fire ant earned its name from its color, it has more to do with its aggressive sting. A fire ant will attack after gripping their prey and inject venom through their stinger. Their sting, which contains alkaloid venom, is very painful and even fatal to some humans. If stung by a fire ant or multiple fire ants, one will experience symptoms of intense itching, sweating, and even become nauseated. In most cases, especially someone with an allergic reaction, should seek emergency medical treatment. On the surface of the skin a sting will result in red bumps and white pustules, but without proper treatment can lead to scarring. The fire ant earns its name from the sensation of the sting, which is described as an “intense burning”. Due to the large number of ants in their colonies, often one will experience multiple stings from multiple ants at one time. It is important to be aware of their large mounds in the sand or dirt areas, which can be noticed more easily after rainfall. Also check with your neighbors and you DFW pest control company, Buzz Kill Pest Control, to see if there have been fire ant stings happening in your area.

Buzz Kill Pest Control knows that ants, especially fire ants, can be quite a nuisance and even a danger to your family and your home or business. There are many types of ants that can invade your property. Identifying the type of ant is very important to the treatment that we provide you. Buzz Kill Pest Control will perform a very thorough inspection to identify what kind of ant is causing your problem in order to treat and eliminate these bothersome pests. Please refer to our Ant control page for more information. You can also contact us today and schedule your free Dallas Fort Worth pest control estimate.