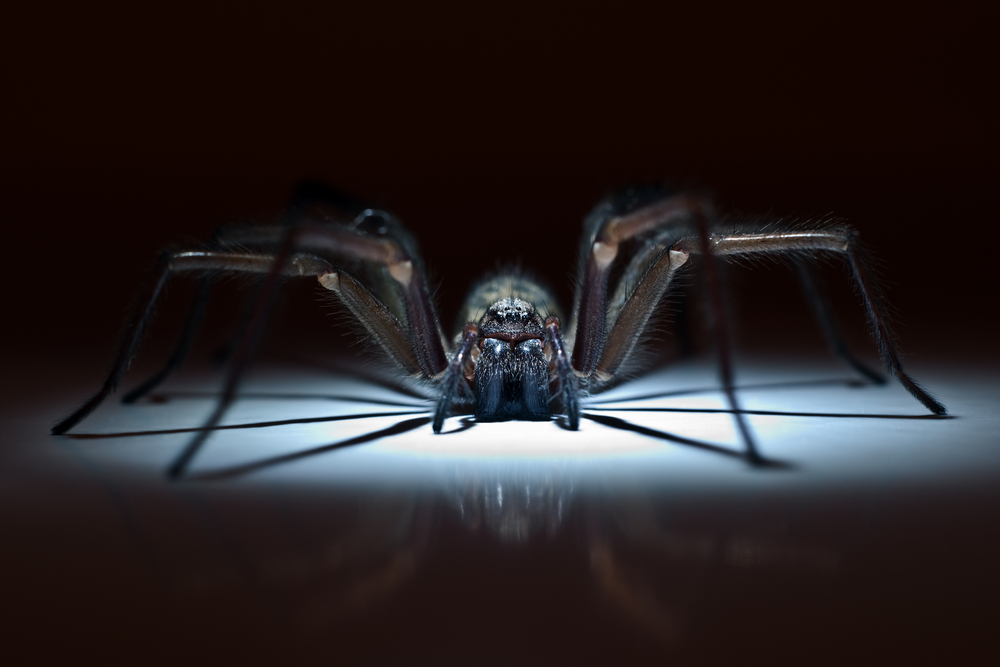 Pest of the Month: Spiders

Most people who see our next Pest of the Month will fall into two categories: One category doesn’t see them as pests while the other category would call an exterminator or simply burn the house down in order to get rid of an infestation. They can be fatally poisonous or reclusive and more afraid of you than you are of it.

Spiders can be helpful critters or household pests. Most people would shriek at the sight of an eight-legged unpredictable beast that commands any room it inhabits, regardless of the fact that the typical household spider’s diet consists of other pests that irritate you more than the spider. Because there are so many different species of spiders, we’ll be outlining a few different common household types, some of which are on the list for
Domestic house spider–Also known as drain spider or funnel weaver, the domestic house spider is a species that can be found in the dark corners of most households in the United States. Often seen in black, grey, tan and brown, the oval-shaped funnel weaver is harmless, often living indoors without ever encountering a human being. Since it’s diet consists mainly of smaller insects, the domestic house spider is helpful to the human in that it eats bugs that humans consider pests, such as gnats (or fruit flies) and silverfish, though it will typically avoid other spiders as prey.

Jumping spider–There are more than 300 different species of jumping spider in North America alone. It’s eight eyes give it 360 degrees of sight, with the front two eyes allowing it high resolution with limited perspective. A highly capable predator, the jumping spider has spot-on reflexes and can jump more than 25 times its body size. While it can be found indoors by hitching a ride on a person, the jumping spider prefers outdoor habitats, choosing to live in grassland environments where its prey tends to be.  The jumping spider is helpful to most Texans by eating bollworms, stinkbugs, and those pesky mosquitos we all hate.

Poisonous spiders can probably account for most of the fear people have of spiders in general. A brown recluse or black widow can most certainly end you if you don’t act quickly, so other spiders tend to get a harmful reputation because almost all spiders look alike to the untrained eye. It’s helpful to train your eyes in order to know whether or not to squash a spider or just continue avoiding it like it has been avoiding you.

Brown recluse: Though it has distinctive markings along its body, the brown recluse looks like a lot of other spiders. Found all over the United States, the brown recluse resides predominantly in the southern states of the country. The way to tell this aggressive species apart from harmless spiders is by looking at its eyes. While most spiders have eight eyes, the brown recluse has only six in pairs located in the front and along the sides of its head. A single bite from the brown recluse can be deadly, so if you’re ever bitten, get to the emergency room as soon as possible.

Black widow: Another well-known poisonous spider is the black widow, characterized by the red hourglass shape along its abdomen. Found all over the United States, the black widow will typically inhabit undisturbed and cluttered areas like attics and basements and outdoors, can usually be found in wood piles and garage spaces. Like the brown recluse, the black widow can be deadly, so get medical attention as soon as possible after a bite.

Huntsman spider: This spider’s bark is worse than its bite. While it may not bark, its size is enough to send anyone running for kerosene and matches to burn down the house. Found in crawl spaces, under flat rocks or hanging over awnings, the Huntsman spider is poisonous, but the species is not aggressive and its venom is not toxic to humans. Still though, because of the size of their mouths, their bite can be awfully painful and you should still seek medical attention.

How to Get Rid of Them – Dallas Fort Worth Pest Control

Whether they’re poisonous or not, you might just want to rid your house of spiders altogether. The best way of doing that is to eliminate their food source. Most spiders eat other insects, so rid your home of gnats, roaches and other critters. Do your spring cleaning a little early this year and sweep down spider webs from ceilings and vacuum up webs and egg sacs from behind the couch and out of dark corners. Spiders (especially the poisonous ones!) tend to like damp and cluttered areas, so clean and organize the attic or other crawl spaces throughout your home. Control moisture and humidity better throughout your home by using a humidifier and getting your AC checked for regular maintenance. If all else fails, give BuzzKill Pest Control a call and we’ll take care of every pest that bothers you.