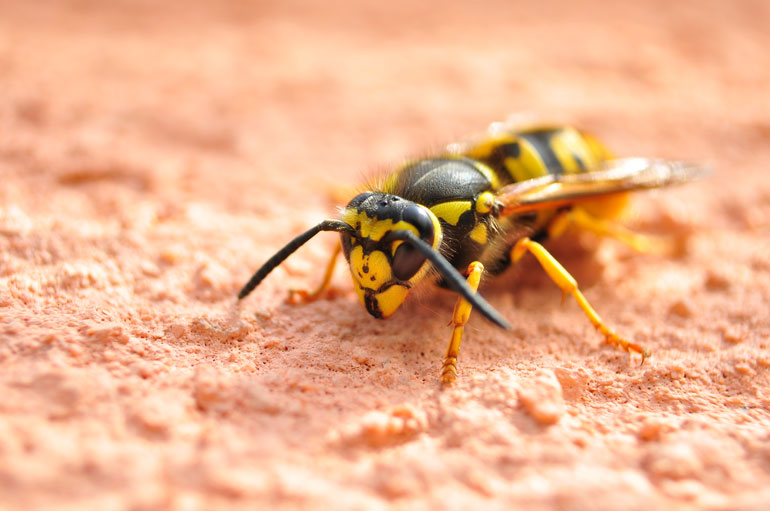 It’s a Bee! Or is it a Wasp? Dallas Pest Control Company Explains the Difference

Barbecues, pool parties, picnics, kayaking, camping – summer is full of exciting outdoor activities that keeps us yearning for the season all year long. However, humans are not the only species that look forward to summertime. Flying pests, such as bees and wasps, are very active during this time as well and can be disruptive to your summer fun. When swatting away one of these flying insects, one usually assumes that it is a bee. However, although they may appear similar, bees and wasps differ in behavior and physical characteristics.

If you are seeking pest control services to remove the stinging insects surrounding your home, the first step is to identify whether it is a bee or wasp. Each of the insects requires different methods of treatment for control and/or removal, such as bee removal for bees. Here are a few characteristics that will help you distinguish between two.

Similarities Between Bees and Wasps

Before addressing the differences between bees and wasps, it is good to understand the characteristics that they share. Both bees and wasps are beneficial insects, as wasps help regulate the population of many pests and bees transport pollen and produce honey. However, they are considered pests due to their ability to sting. In addition, both bees and wasps live in colonies ruled by queens and are part of a working system.

Differing Attributes of Bees and Wasps

Now that we are familiar with what makes bees and wasps similar, we can focus on the characteristics that set each of them apart.

Wasps, including yellowjackets, baldfaced hornets, and paper wasps have smooth, shiny bodies. They are slender with a narrow waist with willowy legs. Bees, on the other hand, have heavier bodies and are very hairy compared to wasps. The tiny hairs help transport pollen from flower to flower.

While bees only feed on nectar and pollen from flowers, wasps are predators that prey on other insects to feed themselves and their young. However, during this time of year (late summer and early fall), wasp queens stop laying eggs and nests decline. Hence, their focus shifts to sweets and other carbohydrates, attracting them to human food. It is very common to find a wasp or two aggressively scavenging around an outdoor gathering where food and drinks are served, especially in July and August. Bees are also attracted to human foods, but only those that contain carbohydrates and sugar.

All wasps make their nests from a papery pulp, a mixture of wood fibers and saliva. These nests are usually built in quiet places that are out of the way from busy areas. Yellowjackets build nests below ground, in trees, under eaves, and even inside of attics or wall voids. Paper wasps prefer horizontal surfaces found on limbs and beams and supports in attics, garages, sheds, and other similar structures.

Bees homes are built vertically and are made of wax. Although most colonies exist in manufactured hives, they will often occupy a cavity in a large tree or building wall to make their nests.

Both wasps and honey bees are annual insects, meaning that their colonies only last for one year. The entire colony dies in the fall, except the newly produced queens. They leave their nests in the late summer, mate with males, survive the winter, and construct new nests the following year.

Honey bees are perennial as they survive more than one year. A strong colony can live year-round because they adapt their living conditions to varying temperatures.

It is also worth noting that wasps and bumblebees are able to sting more than once. They are able to pull out their stinger without any harm to their bodies. However, honey bees have barbs on their stingers which remain hooked into human skin. This causes the bee to lose its stinger, which results in its death shortly after.

Why Wasp and Bee Removal is Important

Both wasps and bees sting to defend themselves and their colonies. When they sting, they inject a protein-filled venom that can cause pain and other reactions. Bee and wasp stings usually only result in local symptoms such as burning, itching, redness, tenderness, and swelling which may last up to a week. Although this can be painful, it is not life-threatening. However, some people experience more serious reactions, such as hives, swelling away from the sting site, minor respiratory symptoms, upset stomach, and headache. Hiring a professional pest control company can keep wasps and bees away from your home in order to prevent them from coming into contact with your family and guests.

How to Get Rid of Bees and Wasps

In order to control or eliminate wasps and bees, the nest must be sealed. Each type of nest requires a different kind of treatment. Exposed wasp nests must be frozen as wasps are unable to fly in temperatures below 50 degrees F. Once there are no surviving wasps inside, the nest can be sealed. If this is done too soon, however, it can force survivors into your home. Hence, it is wise to hire a pest control company as they will know the right time to seal the nest.

If you find any wasp nests around your home during the winter or early spring, they are most likely old nests from the previous summer. You do not have to worry about wasps returning to it as they do not return to old nests. However, carpet beetles and other scavenger insects love old wasp nests, so it is best to remove them completely found near or inside of your home.

Beehives, whether they are in the ground or exposed, can be treated with insecticides in order to eliminate the bees. While do-it-yourself treatments are available to the public, pest control companies use a heavy, professional-grade product that is much more efficient and effective.

Posted on July 31st, 2015 by Buzz Kill Pest Control
It’s a Bee! Or is it a Wasp? Dallas Pest Control Company Explains the Difference

Floods and Rain Cause Heavy Need for Pest Control in Dallas and Fort Worth
|
Fall Pests: These Crickets Are Crazy!